I have a unique approach to creative writing I call the Draft Zero Process.

My Draft Zero Process might be something similar to what other writers do. It may only be a new perspective on a well established work-flow, but because it has made such a significant impact on my productivity, I’d like to share it.

Some believe in outlining a story before writing it, while others insist that such a practice binds them—and their characters—too rigidly. Many argue that the characters in a story must be granted their own voice and be given the freedom to respond to the story’s events. It’s common to hear an author say that a character surprised them and took the story into a new direction. 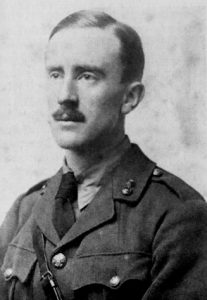 One of the best examples of this may be from J.R.R. Tolkien, with a surprise he encountered when writing The Lord of The Rings. Tolkien started writing the sequel to The Hobbit in 1936, and in its early version, there was no Strider. Strider is also known as Aragorn, who eventually became a king of men. ‘Trotter’ was the name of the hobbit who would transform into the character of Aragorn.

If Tolkien had outlined his story completely and adhered to that outline when writing the entire book, we may not have ever known The Lord of The Rings and may only have heard of an odd sequel to The Hobbit. It is amazing to consider such a deviation from literary history, and yet I will tell you that the first stage of my process is to write a full outline.

A fully detailed and rigid outline.

Every step of the way, exactly as it should be in the final work, with painstaking attention to pacing and character growth. I create this level of outlined before I write ‘Chapter 1’ on any page. And yes, I do hope that the stories I write are as amazing as Tolkien’s.

I call my outline—the one I spend weeks creating—the Draft Zero. When I’m done with it, I put a chapter heading on a page, and I turn my characters loose. That’s the key, the story’s characters. I can plot ahead of time all I want, but the characters in my stories must have a life of their own. Sometimes they’ll be jerks and ignore my hard work and throw me for a loop, but that’s because sometimes they’re brilliant, fresh, and unpredictable.

If great writing was formulaic and a best-selling story was as easy as connecting a series of dots, then we would have programmed computers to write for us, years ago. But great writing is much more than mere mechanics, it’s certainly a creative art. As an artist in the form of an author, I must allow for creative inspiration to supersede all mechanical planning.

When my characters let me finish the first draft of the story, I’m relieved to be temporarily freed of their rebellious and demanding natures. My next task is to go back and perform edits—draft after draft of edits—until the work is polished and finished. 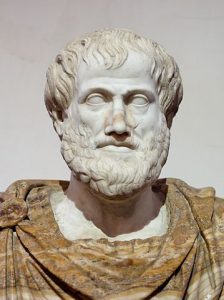 Roman copy in marble of a Greek bronze bust of Aristotle by Lysippus, c. 330 BC. The alabaster mantle is modern.

So, how closely do I follow my Draft Zero Process / outline when I write the first draft? I don’t follow it at all. I use it to make sure I’m keeping a sense of the greater picture and purpose while I’m writing scenes, but that’s about it. With the general idea of what I think will happen, I let my characters respond to the events and conflicts of the story in a way that only they can. They respond in their own way, according to their nature, just as Aristotle advises they should in The Poetics.

With my Draft Zero process, I feel I have enough structure to move forward with a first draft and enough flexibility to be open to creative alternatives. It works great for me, but will it work for you?

How should I know? You’ll have to try it, won’t you!